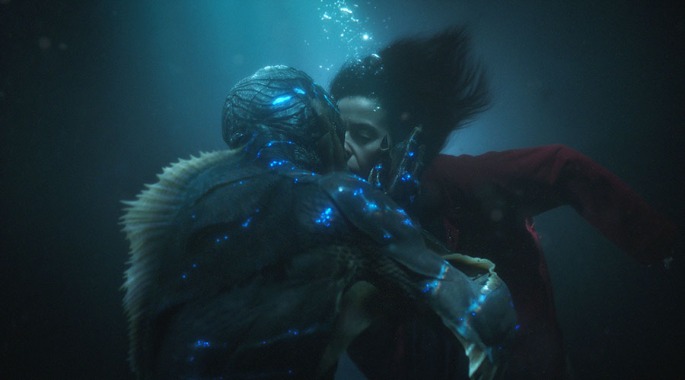 ‘It’s not green, it’s teal” grumbles Michael Shannon‘s Colonel Richard Strickland, not too long re-educated himself on the deviant shade of his brand new Cadillac. As the salesman says, teal is the “colour of the future,” but in Guillermo del Toro’s fantasy romance The Shape of Water it traps its inhabitants in the confines of the past.

Set in a parallel relic of 1962 Cold War Baltimore, The Shape of Water centres around Elisa Esposito (Sally Hawkins), a mute janitor at a secret laboratory who falls in love with The Asset, a humanoid amphibian man dredged from the depths of the Amazon rainforest. Eyed for vivisection by the cruel Strickland, Elisa conspires an escape plan with the help of her friend Giles (Richard Jenkins) and her sympathetic co-worker Zelda (Octavia Spencer).

With a precarious future on the doorstep and the echoes of the Second World War lurking in the periphery, the sense of purgatory is all around. Paranoia is in the air, along with a palpable need to stay one step ahead of Soviet opposition. The eyes of the U.S government are fixed on a fantastical and seemingly unattainable prize amidst the space race: the ultimate proclamation of world power. Who needs Earth after all, when you have the moon in your back pocket?

It is not the moon within reach however. The amphibian man is a creature fit for pulp reader salivation, albeit a lot closer to home. Shades of green are omnipresent, from the sheen of The Asset’s scales to the shade of Elisa’s scrubs. In the darkly cynical and clinical setting of it’s laboratory dwelling, The Asset’s shimming scales and green palette make a pleasant change from the bleak, industry standard of grey. As pleasing as it may be to the eye, the blue-green hue and 50s architecture implies a suspension of societal imbalance between the wild implications of the space race and the comfort of a post-war past.

Teal – and also, green – in The Shape of Water  denotes the aspirations of mankind to conquer new, unknown territories, and when the world has been afflicted by war, what better distraction to look to the stars? Societal recovery following the Second World War propelled itself on an unprecedented scale, a revelry of innovation twisted into simulacrum. This hyperreality culminates in the alien nature of The Asset itself, and the woman whose perception of self  is so rooted in “otherness” that the only entity she feels a connection with is the non-judgemental nature of a newly discovered species. Elisa does not feel at home in her world, just as The Asset itself is – quite literally – a fish out of water, both forced to inhabit a space which does not suit their natures amidst humans who do not understand them and wish to inflict their own means of oppression.

The same could be said for Giles. A gay illustrator renounced of employment for not hiding his sexuality, Giles’ employer opts to string him along rather than admit their own bigotry. He rejects his illustration of a family mealtime, stating that the red jelly in the picture be replaced with green: the colour of the future, replacing classic imagery with a flavour altogether more faddish. As it transpires, Giles’ employer soon decides that his illustrations are not as good as a photograph. His subsequent inhalation of the greenest key-lime pie you ever did see – and aggressive rejection by his crush, the pie-shop assistant – only reinforce Gile’s otherness in the more conservative 60s.

Smattered amongst the teal is a red awakening of a blossoming love. Upon consummating her relationship with The Asset, Elisa’s dress introduces ruby shoes and a scarlet headband, showcasing her desire for the world to see. By the end of the film, even her dress is red, so consumed by love that she follows it until its end. Set upon a background of the “Red Mist” of communism, instances of red are regarded with deviance and suspicion despite being the most sincere. The red velvet of the cinema below Elisa’s apartment implies the purist creativity of film, one that was tainted with the anti-communist propaganda of the era, one that perpetuated the hyperreal “all-American” family, and dream.

In 1960s sci-fi, the alien entity was only ever hellbent on world control, quite often so by stealth. By comparison, The Asset merely wants to be left to its own devices in a peaceful coexistence far from the gaze of the human world. Elisa’s transformation and movement from the human world to the amphibian shows that humans have more to gain in trying to comprehend which they do not understand, rather than destroy it. Elisa’s acceptance and love of The Asset is the core of this film, reminding that amongst the machinations of futurism it is the most earnest and honest values that survive through time. A teal innovation may signal the quest for a new beginning, but through touches of red Del Toro evokes acceptance, purity and a heartfelt nod to the past.