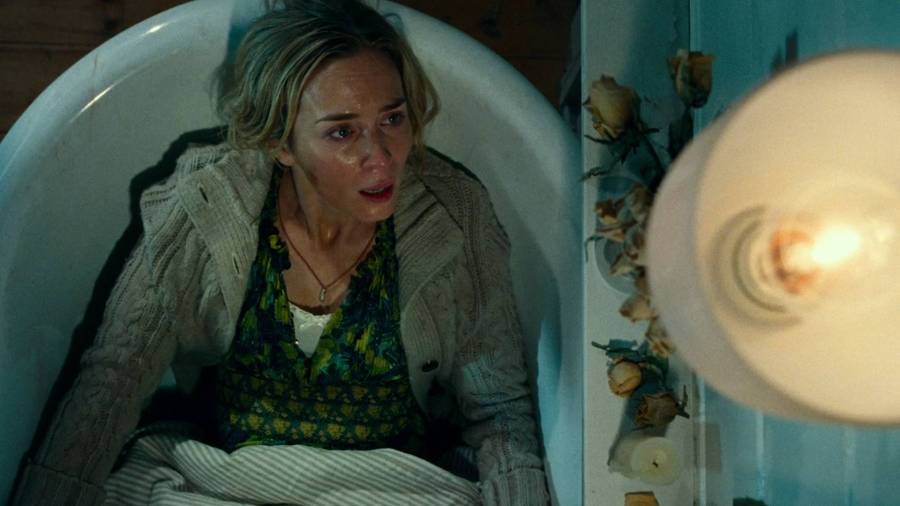 Shh! Shh! But wait – even a “shh” is a noise. Best to practise stifled breathing, in the world of A Quiet Place, for John Krasinski‘s directoral debut has an originally novel take on suspense.

Set in a world of a never-quite-explained invasion, the Abbott family are some of incredibly few survivors. The majority of the human race have been wiped out by ravenous alien creatures, blind, swift and blessed with hypersensitive hearing that alerts them to potential prey lurking miles away. The sleepy hometown of the Abbotts is desolate and deserted, its inhabitants long devoured and its contents clumsily pillaged by the sightless creatures. The family have only survived this long by communicating silently via sign language. Their eldest daughter Regan (Millicent Simmonds) is deaf.

Such fluency is pivotal when even the soft chop of salad or the tap of Monopoly tokens are undertaken with utmost precision, whereas louder activities are presumably avoided altogether. Even footsteps on the earth are muffled by the avoidance of shoes, the sound dampened by sand. All sound is treated with suspicion, and rightly so.

There is an imminent and palpable fear at the prospect of everyday existing, whilst the prolonged silence of the film is the dizzying antithesis of a modern cinema experience. This ominous immersion transplants cinema-goers directly into the world of A Quiet Place, sparking a tense friction and that heart-in-the-mouth feeling that death is lurking with baited breath just outside of one’s periphery.

It is perhaps this that grounds the film emotionally. The endless threat of child harm or death, the sickeningly plausible body horror of pregnant mother Evelyn (Emily Blunt) (and her saga with that damn nail) and a father’s (portrayed by Krasinski) quest to protect them from otherworldly danger are all plausible – if extrapolated – real-life worries. How can one be silent in mortal terror, anguish, childbirth or the unavoidably loud aftermath?

The bold use of amplified diegetic sound is undermined somewhat by Marco Beltrami’s score. In an interview with IGN, Krasinski stated that what he wanted to do was to “make sure that people had some familiarity with movies from before, so it didn’t feel like an experiment.”[1] With the way that A Quiet Place thrives on the tension derived from the paranoia of making any noise at all – a feeling that extended itself to cinemagoers too uncomfortable to dare munch on their popcorn – it would have been interesting to see a different edit where its creators had the courage to stick to only diegetic sound in its most emotive and stressful moments.

The crossing paths of humans and aliens is all but inevitable, but in their actions to avoid, overcome or outwit the mysterious creatures, we learn everything about the family and compare their choices with the ones we fantasise we may have made as people. In A Quiet Place, actions really do speak louder than words.

Welcome to POSTMODERNITY, a self-contained hub of film, TV, criticism and everything in between.

Marvel have a villain problem: it's a fact. For too long, villains more complex than your obligatory Big Bad were hard to come by - but things have changed. Following @avengers #InfinityWar we take a look at Marvel's "grey villains" - Loki, Killmonger and, of course, Thanos - and what it is that makes them so engaging... (#linkinbio)
A film so silent, it left cinemagoers too uncomfortable to dare munch their popcorn...🍿 Read more on how @aquietplacemovie utilises sound - or the lack of - on postmodernity.co (#linkinbio)
🤫There is an imminent and palpable fear at the prospect of everyday existing, whilst the prolonged silence of @aquietplacemovie is the dizzying antithesis of a modern cinema experience. This ominous immersion transplants cinema-goers directly into its world sparking a tense friction and that heart-in-the-mouth feeling that death is lurking with baited breath just outside of one’s periphery. Read more on how the film utilises sound - or the lack of - postmodernity.co (#linkinbio)
🤫It's oh. so. quiet - shh! Shh! But wait - even a "shh" is a noise. Best to practise stifled breathing in the world of @aquietplacemovie, for @johnkrasinski's director debut has an originally novel take on suspense... ⠀ ⠀ Read more on postmodernity.co (#linkinbio)
“When something is written down, does that make it true?” ~ Read @jackiefilm: A Respect for History on postmodernity.co (#linkinbio)
#ICYMI ~ John F. Kennedy and his wife Jackie were in many ways the celebrities of their time. In @jackiefilm Pablo Larraín shows how Jackie Kennedy was determined to turn their fame into legacy in the aftermath of tragedy (LINK IN BIO)
“When something is written down, does that make it true?” ~ @jackiefilm: A Respect for History. Read about the Natalie Prtman led biopic on postmodernity.co (link in bio)
#ICYMI From opinion + innovation to otherworldly aspiration, the colour teal was omnipresent in #TheShapeOfWater. We discuss its use in Guillermo del Toro’s Oscar winning film...
#Annihilation has been causing a stir due to it being considered too “risky” to acquire a distributor. Now @kaylwattson explores why going straight to #Netflix may have been the best for the sci-fi film. (LINK IN BIO)
NEW: “It’s not green, it’s teal ~ it may be the colour of the future, but in Guillermo del Toro’s #theshapeofwater it traps its inhabitants in the confines of the past. (Link in bio)